Paul Reed Smith guitars are very finely built instruments. The guitars are built by musician for musicains, and this attitude is meticulasly reflected into their guitars.

The story starts off the Paul Reed Smith built his fist guitar while at music college to challenge a professor for extra credit, and from here, the legend was born.

From here, Paul campaigned relentlessly around the concert halls to get a sale to some of the musicians, claiming “One night in ten I’d make a sale.” But, because of these efforts, he inticed such artists like Carlos Santana, and now has an exhaustive list including Dave Navarro, David Grissom, Nick Cantanese, and many many more. Seriously, the list is pretty big. 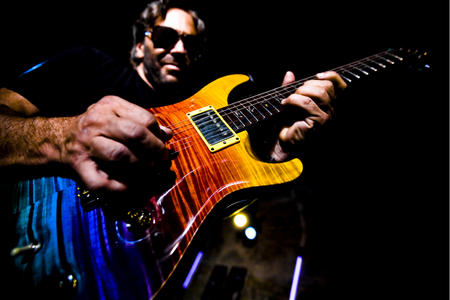 After gaining the support of some big artists, Paul canvassed guitar shops up and down the country, returning with enough of an order to start his shop, building his team.

Today, PRS guitars are considered some of the finest instruments available. Their superior build, rock solid bodies, and signature bird inlays make it an instant collectors item. If you’ve ever had the pleasure to hold one in your hand, you understand it immediately.

We have reviewed a few of the guitars such as the Custom 24, the 305, and the Hollowbody II.