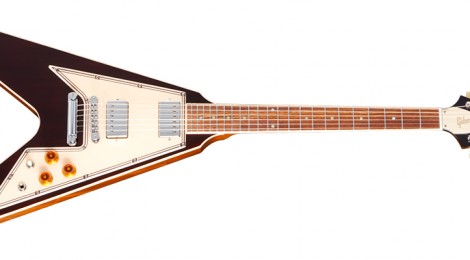 The first Gibson Flying V was produced in 1958, the same year it’s brother was made, the Gibson Explorer. The guitars were designed by the president of Gibson at the time, Ted McCarthy.

The Flying V offered guitarists a radical escape from the normal guitar, which for the changing times of the guitar, was revolutionary. If you think about the time, this is when major advances were being made with distortion for electric guitars. So having a Flying V just made you that much more badass.

Right now, there are a few versions of the Flying V for Gibson, ignoring the Epiphone versions.

Some of the greatest guitar virtuosos have used the Flying V, including:

The body is made of Mahogany, and so is the neck, but there is a joint in the neck, so it’s not one piece. The tuners are chrome Kluson TonePros on a traditional Flying V headstock. Pickups are Burstbucker Pros in both neck and bridge position. The bridge is the standard Tune-o-Matic with a stop bar.

I’m not quite sure how I feel about the signature Kirk Hammett version, as it comes stock with ducttape…

But of all these guitars, the most epic version of the Flying V comes from it’s Korina Flying V, a version of the 1959 model. They call it a near-perfect recreation.

How do you like the Flying V? Should I add you to the list of notable players?