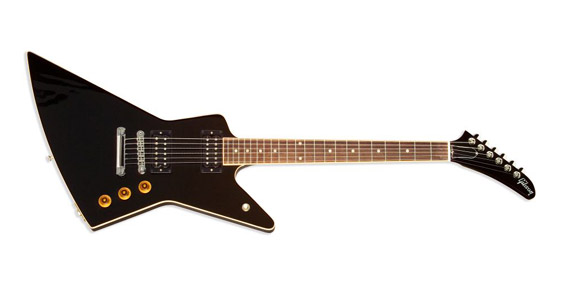 In 1958 the world was presented with the Gibson Explorer. The Explorer had edges, had a radical design, and most likely scared a lot of people. I suspect this is what Gibson was after since this guitar became one of the most serious powerhouse guitars a player could buy. It’s solid mahogany body and rosewood fingerboard makes it fast, strong, powerful, and heavy!

This design has been since copied by many factories, but hard to beat. Especially in circles where people know the difference it’s not really that cool to be playing a cheaper replica. After all, this is an important aspect of playing the guitar!

As most manufacturers have, Gibson makes a custom or artist line of their guitars tailored to specific artists. These are only released sometimes, on specific years but they can still be found. Notice on the black explorer above, there are gold volume/tone knobs and no pickguard with a white outline of the body. In the guitar below, the headstock is changed making the explorer into what is known as the Futura.

Typically the Explorer has two humbuckers, 496R and 500T. The fretboards come stock with 22 frets, something that you can really hit with the radical cutout on the bottom of the neck.

Some artists that use an Explorer are:

Do you use an Explorer?