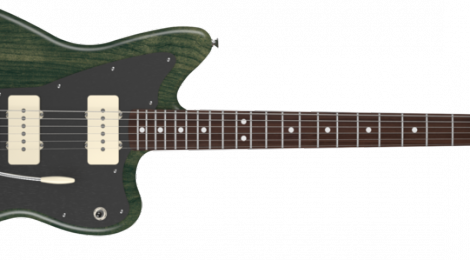 The Fender Jazzmaster is a beautifully funky guitar. It kind of looks like a Fender Stratocaster that’s been hit on the side and lopped over like the neighbors old fence.

I am a major fan of the tailpiece on the Custom Deluxe model, with their 2-Point Synchronized Tremolo with Block Saddles. It brings back that 50s feel.

In 1958 this guitar came out as the jazz players guitar, but I guess that much is obvious from the name of it. Apparently the offset of the guitar made it more comfortable to play the guitar while sitting down.

The necks are generally maple, but the fretboards, as with most Fender guitars, range from maple and rosewood. The pickups are also very different depending on the model, from a pair of soapboxes to single coils  to Seymour Duncan humbuckers.

A funny bit of trivia is that the Jazzmaster was intended, as discussed above, for the cool cat jazz masters, but it was more embraced by the surf punks looking for reverb soaked madness. The jazz cats eventually did start using it, but not to the extent of the guitar heros looking for the road less travelled.