The Gibson SG. Angus Young is the first person that comes to mind when I think of an SG. He has a signature series. 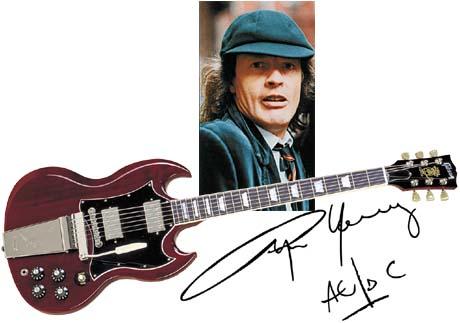 I personally have always wanted this. I love the wammy bar he’s got there. I believe its a replication of a 68-70 SG, when they were using this style of Bigsby tremolo’s for a few years on some of the guitars. He’s got the ’57 Humbuckers in there as pickups, they are pretty awesome sounding and a very Gibson signature sound.

Eric Clapton when he was playing in Cream also had an SG:

He nicknamed it the Fool. Isn’t it a beautiful thing?

The third guitar god that comes to mind when I think of an SG is Jimmy Page. He regularily played a Les Paul, yes, but he also stepped into a doubleneck SG to play stairway to heaven:

I love how this one has the split fret markers.

So the Gibson SG Standard is my favorite. You can tell it by the missing first fret marker, and the covered pickups. 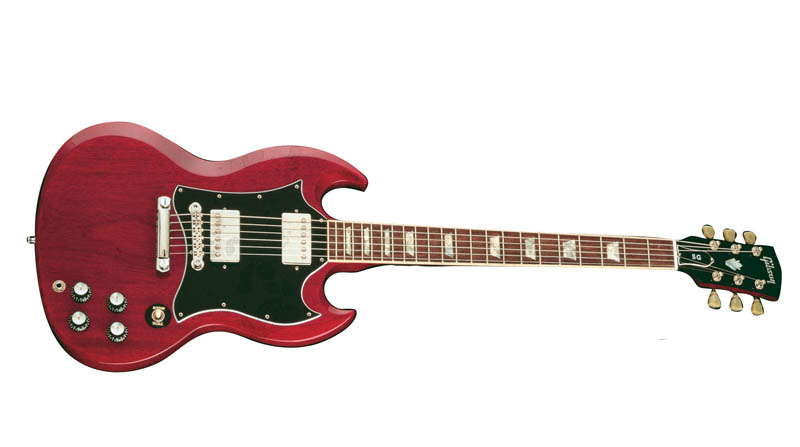 Like with the Les Paul Custom model, the SG Custom is easily identified by the square fret markers, as well it has the first fret marker in place. It comes in various arrangements, some with trems, some with three pickups, some look the same as the customs, some have P-90’s. Below is a photo of the Les Paul model, that was produced in the early 60’s for a few years when it was first introduced to the market, but was soon made into the SG we know it as today. Notice the trem cover markings.

You may find a trend here in how to identify the style of the Gibson you’re looking at, and the classic has dotted fret markers. Its also usually got the P-90’s in there, or some soapbox alternate of it. Typically though, its got the standard bridge seen on most Gibsons.

I had never seen this last one here. Its called a SG Zoot Suit. I think its pretty cool to look at, do you?

For product specs, and some more pricing, go check out Gibson’s website.