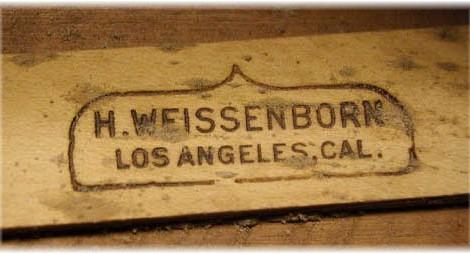 The Weissenborn guitar is a Hawaiian lap slide guitar. It could easily be mistaken for an acoustic guitar, with a characteristically large, square usually hallow neck.

The guitars were only made for ~20 years between 1920 and the 1930 by Hermann Weissenborn, in Los Angeles, California. There is suspect that he was also producing some in Hawaii at the same time, as this guitar was used by musicians over there heavily.

It is estimated that there is only around 5000 of these instruments made in their lifetime, which further increases the special nature of these guitars.

Today, there are a few guitar manufacturers who are reproducing this beautiful instrument, hoping to encourage the spirit that also comes along with these guitars.

It’s fascinating to know that when these guitars were made they had the following price tags:

A list of players who are using the guitars today from Wikipedia gives some amazing artists:

Many of you may have previously been wondering what kind of guitar it was that Ben Harper was using. Well, now you know. Ben has almost single handedly been responsible for the revival of this guitar, perhaps in part due to his grandfathers music store he grew up in.

These guitars are truly beautiful instruments. They have a touch and feel like you’re really playing an instrument that was designed to be played and with skilled hands. If you have ever touched or played one, you will understand.

Some guitar manufacturers that are making these instruments today are Asher Guitars, David Dart, Emmanuel Romont, Christophe Grellier. The cool thing about these newer manufacturers of these guitars is that they are also putting in some electronics so that you can amplify the guitar! This is getting to the state of major ass kicking.

Do you play a Weissenborn? I’d love to see some photographs of yours!